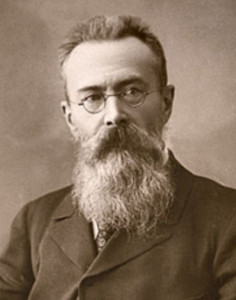 Nikolai Rimsky-Korsakov (1844-1908) composed his “Russian Easter Festival Overture, Op. 36” between August 1887 and April 1888, and conducted the premiere in St. Petersburg on December 15, 1888. The work was composed when his powers of form and orchestration were at their height. This mature period produced most of his greatest works, not just this overture but also “Scheherazade, Op. 35” and the “Capriccio Espagnol, Op. 34”. Having taught composition, harmony, and orchestration for some years at the St. Petersburg Conservatory, he achieved in these late works a masterful and uniqueness of form, exquisite melodies, and rich orchestration. In his autobiography, he writes as follows about his overture: “In my overture are combined reminiscences of the ancient prophecy and of the gospel narrative: also a general picture of the Easter service with its pagan merrymaking.”

For much of his life, Rimsky-Korsakov combined his composition and teaching with a career in the Russian military, at first as an officer in the Imperial Russian Navy, then as the civilian Inspector of Naval Bands. As Inspector, he visited naval bands throughout Russia, supervised the bandmasters and their appointments, reviewed the bands’ repertoire, and inspected the quality of their instruments. He wrote a study program for a complement of music students who held navy fellowships at the Conservatory, and acted as an intermediary between the Conservatory and the navy. Rimsky-Korsakov applied himself with zeal to his duties, and engaged in a long-standing desire to familiarize himself with the construction and playing technique of band and orchestra instruments. These studies prompted him to write a textbook on orchestration, which is still used today. His inspector duties involved discussing arrangements of musical works for military band with bandmasters, encouraging and reviewing their efforts, scheduling concerts at which he could hear these pieces, and orchestrating original works, and works by other composers, for military bands.

In this transcription, it is easy to hear his knowledge and his love for wind and percussion instruments. In the transcribing process, one can learn a great deal about how he combined the many colors of the wind instruments and observe how, in this extraordinary work, he used the various colors to portray the somber mystery of Good Friday and the uninhibited rejoicing of Easter Day.

The following recording of this transcription is performed by The San Luis Obispo Wind Orchestra.

The following recording of this transcription was performed on Easter morning, 2016 by The Tennessee Tech University Wind Ensemble at the Chicago Symphony Center.