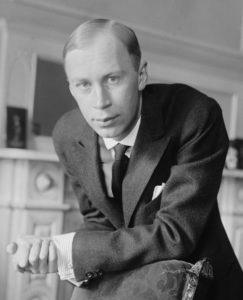 Sergei Prokofiev was a Russian composer, pianist and conductor. As the creator of acknowledged masterpieces across numerous musical genres, he is regarded as one of the major composers of the 20th century. His works include such widely heard works as the “March” from The Love for Three Oranges, the suite Lieutenant Kijé, the ballet Romeo and Juliet, and Peter and the Wolf. He composed seven operas, seven symphonies, eight ballets, five piano concertos, two violin concertos, a cello concerto, and nine completed piano sonatas. Prokofiev wrote seven symphonies. Of these, the ‘Classical’ Symphony (No. 1), written in 1916-17 with the work of Haydn in mind, is the best known.

Many musical historians cite Prokofiev’s Symphony No. 1 as evidence that he, rather than Stravinsky, is the true father of the movement known as ‘neo-Classicalism:’ namely, the twentieth-century modernists who wrote their own versions of the classical period’s music.

And yet Prokofiev seems to be showing his neo-classical colors more as an exercise than because of any true belief in a movement; Stravinsky was writing ‘classical’ music, benefiting from the hindsight of his position in the twentieth century. Prokofiev’s declared intention was to create an original piece of music in classical style, drawing inspiration from the works of Joseph Haydn and other classical composers, such as the Mannheim group. While elements of the old and the new styles are intermixed, the piece creates an overall sense of balance, lightness, and brilliance so characteristic of the gallant style. In the same time, the tricks discovered by modern music make it sound daring and mischievous, just as Haydn would have liked it.

The fourth movement is a brilliant, vibrant, virtuosic movement. It is written in sonata form, featuring three main themes.

This setting for wind ensemble retains the same excitement as the original, but adds an array of instruments not used by the composer, thus adding a diversity of timbers that breathes even more life into the composer’s work.

The following recording of this arrangement is performed by James Logan Wind Symphony.