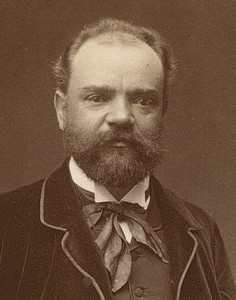 While guest conducting in Northern California in the spring of 2015, I was asked by members of Clarinet Fusion, a high level nine-member San Francisco Bay Area clarinet choir, to arrange a work for them to be performed the following spring in Davies Symphony Hall for San Francisco Symphony’s Community of Music Makers (an outreach program for community chamber ensembles.) They had chosen the first movement of Antonín Dvořák’s Symphony No. 9 in E minor, “From the New World”, Op. 95, Adagio-Allegro Molto, for their 2016 performance.

Reducing a major work for large symphony orchestra to nine players was a huge challenge, but lots of fun. On April 3, 2016, the arrangement was premiered at Davies Symphony Hall by Clarinet Fusion to a small audience of family and friends as a part of San Francisco Symphony Community of Music Makers Chamber Music Workshop. As one can imagine, it is a very challenging arrangement, but playable. The instrumentation consists of 1 E♭ clarinet, 4 B♭ clarinets, 1 alto clarinet, 2 bass clarinets, and 1 contra alto clarinet. The players of Clarinet Fusion were very helpful in making changes as they began rehearsing the piece. Therefore, this arrangement is as much theirs as it is mine.

Composed in 1893, Symphony No. 9 in E minor is a work written by the Czech composer when he lived in the United States from 1892 to 1895. Dvořák was the head of the National Conservatory of Music, which no longer exists. The composer writes, “I have simply written original themes embodying the peculiarities of Native American and African American music, and, using these themes as subjects, have developed them with all the resources of modern rhythms, counterpoint, and harmonies.”

The Symphony has a special meaning to me: While on a concert tour in 2006, the Cal Poly San Luis Obispo Wind Ensemble performed an evening concert in Karlovy Vary, Czech Republic, the exact location where Symphony No. 9 received its European premiere.

Neil Armstrong took a recording of the New World Symphony to the Moon during the Apollo 11 mission, the first Moon landing, in 1969.

This arrangement was premiered at Davies Symphony Hall on April 3, 2016.

This is a recording of Clarinet Fusion performing this new arrangement for clarinet choir.