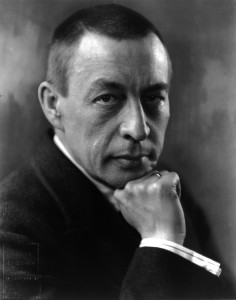 The inspiration to transcribe five of the fifteen choral works contained in Sergei Rachmaninoff “Vespers, op. 37” came from many years of performing Bruce Houseknecht’s transcription of Pavel Tschesnokoff’s “Salvation is Created.” This extraordinary published work is used throughout the wind band world both as a warm-up chorale for rehearsals and as a hauntingly beautiful piece to add to concert programs.  These five Rachmaninoff transcriptions are designed to be a sequel to the Tschesnokoff/Houseknecht work. Tchesnokoff (1877-1944) was a Russian choral conductor/composer and lived at the same time as Rachmaninoff (1873-1943).

Numbers 6, 2 and 15 go together beautifully to create a wonderful setting in that order.  Numbers 3 and 4 can easily stand alone.

Rachmaninoff was a composer, pianist, and conductor. He was widely considered one of the finest pianists of his day and, as a composer, one of the last great representatives of Romanticism in Russian classical music. Choral music makes up a relatively small part of Rachmaninoff’s creative output, yet the medium inspired what many music lovers treasure as his most profoundly affecting composition.  “Vespers, op. 37” consists of 15 liturgical choral works for A cappella choir and was composed in less than two weeks in January and February 1915.   The first performance was given in Moscow on March 10 of that year. It was received warmly by critics and audiences alike, and was so successful that it was performed five more times within a month. “Even in my dreams I could not have imagined that I would write such a work.”  Rachmaninoff told the singers at the first performance.

For years, I have been fascinated and moved by the beauty of these A cappella choral pieces.  Working with woodwinds and brasses and even percussion, I have come to realize that the wind band is much like a choir with its many colors and vocal-like emphasis on balance, blend and sonority.  During the arranging process, the heavenly sounds of the traditional Russian Orthodox choir and its sonorous chanting inspired me to push the wind band to its limits in reproducing the deep and ringing choral sounds of the Russian choir.

The following recordings of this arrangement were performed by The San Luis Obispo Wind Orchestra.

Vespers No. 15 – Vzbrannoy Voyevode (Thanksgiving to the Mother of God)

Wind band arrangements for Vespers No. 3 and 4 have not yet been recorded. The following sound files were computer generated by Sibelius music notation software.

Vespers No. 3 – Blazhen Muzh (Blessed Be The Man)